When controlling gas flow, volume is your goal. Choosing the right device in the beginning can sometimes be the difference in your application's success or failure and saving money.

In the industrial gas or welding industry there are two basic types of flow control devices.  They are generally referred to as fixed pressure / variable orifice and variable pressure / fixed orifice.

A typical flowmeter regulator is a fixed pressure / variable orifice device.  The pressure is fixed at the factory to a “compensated” or calibration pressure and the gas flow is increased or decreased by adjusting the variable orifice or valve that is attached to the outlet of the flow meter regulator.  Pressures are set and fixed at the factory depending on the flow range desired and the gases are being used.

What is usually referred to as a “flowgauge regulator” is an example of a fixed orifice / variable pressure flow control device.  The regulator varies the pressure through a specially drilled or critical orifice usually mounted at the outlet of the regulator.  These devices have a special gauge calibrated to read in SCFH rather than PSIG.

Both the flow gauge and the flow meter found on flowgauge regulators and flowmeter regulators, respectively, indicate how much flow is being delivered.

All three devices have their advantages over the others.  Can’t make up your mind? Refer to the product selection chart below or contact our technical experts. 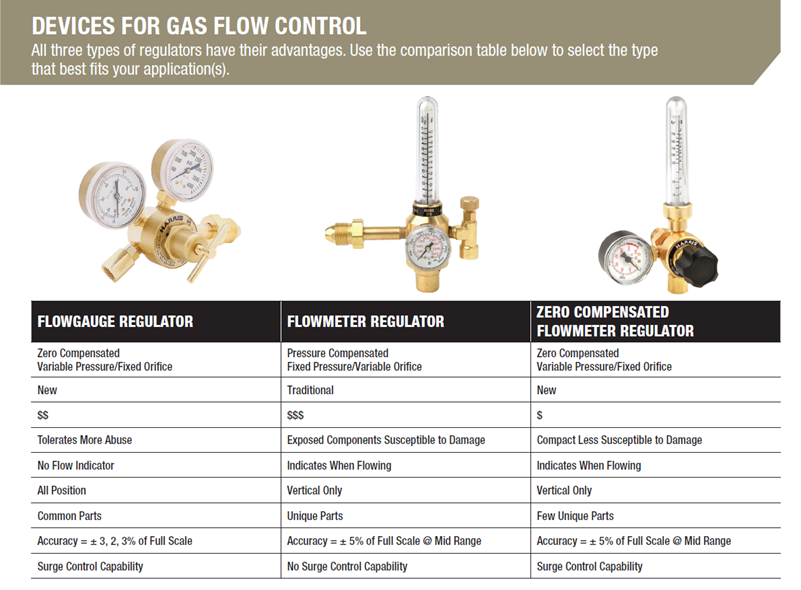