A discussion about oxygen/acetylene vs. air/acetylene torches, including applications, comparisons, and base filler metal suggestions

When brazing and soldering, most HVACR technicians routinely use manual torches as their heat source. For brazing there are generally two equipment options to choose from: oxygen/acetylene or air/acetylene. While alternate fuel gases are available, most contractors still use acetylene. The equipment features and benefits of each type will be the focus in this article.

A major difference between the two setups is how acetylene is combusted. An oxygen/acetylene system requires a cylinder of compressed acetylene gas as well as a cylinder of compressed high-purity oxygen. It combines these gases to get an intense flame temperature. An air/acetylene system only requires the use of a single acetylene tank and gets oxygen from the atmosphere. Since air contains only about 21% oxygen, it was difficult for older air/acetylene torches to reach the higher flame temperatures necessary for brazing. This limitation made these torches suited more for low-temperature soldering.

To obtain a higher flame temperature with air, the ratio of air to acetylene must be increased. With the modern development of the swirl combustion design, air/acetylene systems became useable for high temperature brazing. In these torches, acetylene gas traveling through the tip expansion chamber creates a Venturi effect siphoning more air into the tip. The larger air volume is mixed with the acetylene at increased velocity, and a rotor or vane homogenizes the gases. This creates a richer mixture that burns more efficiently. This unique tip design gives the flame its distinctive swirl pattern.

Temperature
Flame temperatures can vary as they are affected by severalfactors. Most oxygen/acetylene flames, however, measure close to 5,400°F at the end of the inner cone. Air/acetylene flames measured at a similar location typically reach 3,000°F. The fact that lower flame temperature does not necessarily mean reduced heating efficiency will be discussed later.

Portability/ease of use
Each system requires the use of regulators, hoses, torch handles and tips, but components are unique to each type of system 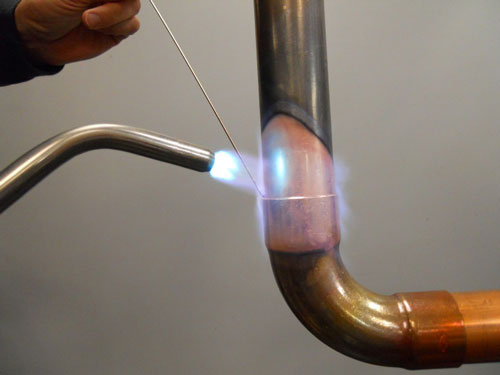 Capillary action works to pull the melted brazing alloy into the space between the parts being joined. An air/acetylene torch is being used here

Oxygen/acetylene: Most setups used in the HVACR industry are of the compact portable-torch style. The operator must carry and refill two cylinders so the additional cost of the oxygen cylinder must be considered. The cylinders are usually industry standard “MC” acetylene (10 cu ft) and “R” oxygen (20 cu ft). A neutral flame uses close to a 1.1:1 ratio of oxygen to acetylene. Since cylinder volumes are different, the draw off is unequal. This means contractors may often make extra trips to the gas distributor or carry backup cylinders.

Air/acetylene: These systems require only the use of a single “MC” or “B” (40 cu ft) size acetylene cylinder. The single cylinder and simpler torch/regulator components make the system easy to carry. Another advantage of an air/acetylenesetup is the ability to run different tip sizes at a single pressure setting. This eliminates the need to remember and adjust the pressure for both gases for different tip sizes—a requirement with oxygen/acetylene. 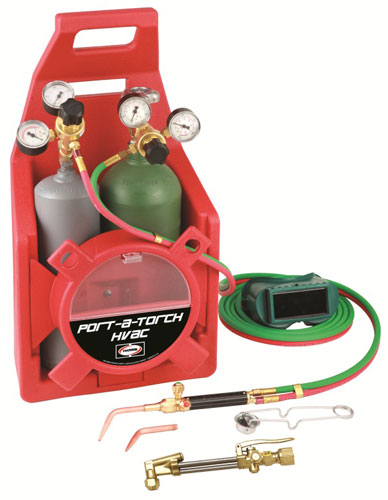 Safety
Since two gases are being mixed in an oxygen/acetylene system there is potential for a flashback, which is the ignition of mixed gases. This safety concern is reduced with an air/acetylene torch since only a single gas is being used.

Versatility
Oxygen/acetylene systems are a popular choice because of their ability to work on a wide range of applications. For example, steel can be welded with standard tips or cut with a cutting attachment. Large-diameter tubing can also be heated using a multi-flame tip. For soldering, air/acetylene systems are preferred. The flame characteristics allow lower heat input and reduce the risk of overheating solder and flux.

Flame characteristics and brazing
The fact that an oxygen/acetylene flame has a higher temperature has already been mentioned. The important consideration is not temperature by itself, but how heat is distributed.

In welding or cutting, the oxygen/acetylene-focused flame is necessary because the heat needs to be concentrated at a small point. For brazing, a different mechanism called “capillary action” is required to pull melted brazing alloy into the space between the parts. To achieve uniform capillary action, both parts must be evenly heated before adding rod. This broad preheat promotes heat conduction through the joint and brings both pieces to correct brazing temperature. 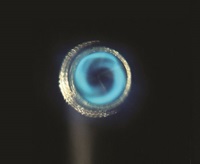 Since the highest temperature is focused at the end of the inner cone, if oxygen/acetylene is being used for brazing, the torch must be kept in motion to evenly distribute heat. The torch also needs to be located farther away or the flame intensity will overheat the part—especially troublesome on brass or aluminum.

The air/acetylene flame is more forgiving. The inner cone can be placed closer to the part and be left there longer with less chance of burn through. The broader flame tends to wrap around the tube/fitting and provides wider heat distribution. Many in the industry feel these features make brazing easier, especially for new technicians.

Aluminum
When brazing copper, phosphorus-copper-silver rods melt at a temperature significantly below the base metal’s 1,981°F melting point. An industry shift to aluminum coils and other components is being seen. Repairing aluminum is different. The base metal melts at approximately 1,200°F, but most filler metals used for aluminum melt just below this temperature, often providing only a 130°F difference.

The lower aluminum-melting temperatures means the heat input must be reduced and focusing the flame on one spot must be avoided. Use oxygen/acetylene with care— the higher flame temperature, especially close to the inner cone, can quickly melt the aluminum tube. Air/acetylene’s lower heat input and wider flame pattern often makes this job easier. 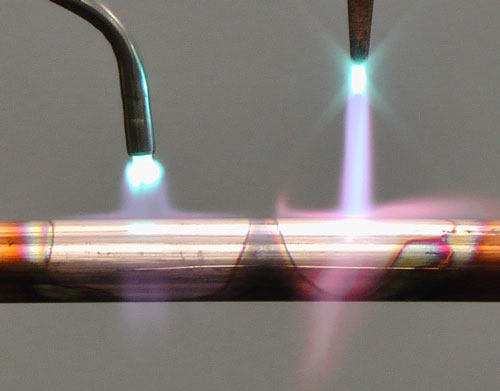 Summary
In most parts of the United States, oxygen/acetylene equipment maintains its industry dominance. For many air-conditioning brazing applications, however, air/acetylene torches are a logical alternative. Contractors who try air/acetylene torches often find their portability and lower operating cost easily offset the potential of a slightly longer heating time.

Bob Henson is Technical Director for Harris Products Group and has 35 years of metal joining experience. He is a member of the American Welding Society, and chairs the A5H committee that writes brazing filler metal and flux specifications. |Henson is a member of the AWS Brazing Manufacturers Committee; the US Technical Activities Group that reviews International ISO brazing documents; as well as the National SkillsUSA HVACR Technical Committee. He is also a Member of RSES and the MSAC.

Mike Scruggs is a Technical Support Specialist for Harris Products Group and a lead field-braze trainer. He is an American Welding Society Certified Welding Inspector, and a member of the AWS A5H committee that writes brazing alloy and flux specifications. He judges the HVACR brazing competition at the National Skills-USA event, and is a member of the Butler Tech Vocational School (Hamilton, OH) HVACR advisory board.